Installing aond liner you must get the ground as smooth as possible. A pond liner underlay is always a good idea but here we look at other considerations we undertook when constructing our pond 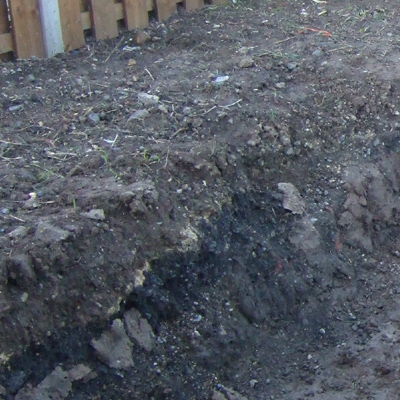 Our initial reservations about the quality of the earth under the garden were completely backed up after the pond dig. After the first layer of topsoil we were greeted by a mix of clay and buried stone. This was difficult for the mechanical digger to get through and it was many hours of scraping before we made it through to the base layer of the pond.

One problem of the stoney ground was that it became obvious that we would have a lot of work to do to make the pond surface smooth. Simply laying the pond liner on top even with pond liner underlay would risk taering and puncturing the fabric. Any large stones were removed where possible but we had to draw a line or we would probably still be chasing the bottom of the pond now! Where large stones could not be removed they left sharp corners. Fortunately, we had dug up some clay which could be manhandled and used to soften the corners.

I’ve tried to take a couple of pictures showing the clay being pummelled into recesses of the pond surface. We already had the pond liner underlay but it is sensible to make the pond surface as smooth as possible to avoid problems further down the line.

If you don’t encounter any clay then soft building sand can be used to fill in any gaps. This is especially important at the bottom of the pond. The base will be taking the full weight of the pond water and at 1 tonne per square metre it will put a lot of strain on the pond liner allowing any sharp surfaces or stones to push up into the liner.

It is quite easy to run out of patience at this stage but it’s worth having a good final look round the pond surface and patching the earth up to get it as smooth as possible. Once you are happy it’s a good idea to move onto the next stage immediately – if you wait until the next day you risk rain which may expose more deviations in the pond surface via running rain water. It was time to lay the pond liner underlay.

Tips and Advice from the Blog

What To Do If Your Pond Freezes Over

Winter is a great time of the year; but what does it mean for your pond? What should you do if your pond freezes over?

See All Tips and Advice